You are here: Home1 / Past PDX Blues Event 20132 / Popa Chubby Brings His Rockin’ Blues to Oregon

Ted Horowitz, better known to the world as Popa Chubby has not performed in Portland in a number of years. So if you’re a fan of heavy- 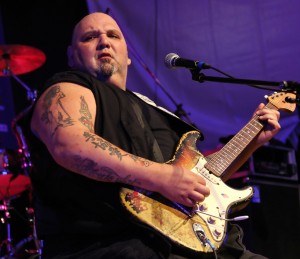 hitting, rocking blues, then you’re not going to want to miss these two rare appearance in Oregon. His career has always been about moving forward and carving a place for himself in the imposing terrain of the music business, overcoming odds to continue growing and maturing as a creative force. He has built a constantly increasing base of fans across the world, starting out in the punk scene, yet the blues has always been the foundation of his playing style.

“Since I’d grown up on Hendrix, Cream and Led Zeppelin,” explains Popa Chubby, “when I started playing blues in New York clubs I understood that the blues should be dangerous, too. It wasn’t just from playing in punk bands. Howlin’ Wolf and Muddy Waters were dangerous men. They’d cut or shoot you if they thought it was necessary, and Little Walter packed a gun and wouldn’t hesitate to use it. That danger is a real part of the blues and I keep it alive in my music.”

Well, I’m sure his shows here in Oregon will not come to that danger point, but you know his blues are going to be deadly in his approach and powerful playing. This one will bust down the doors and burn up the stage.

Popa Chubby will be appearing at Duff’s Garage, 2530 NE 82nd on Tuesday, October 7th. Showtime is 9:00 pm. Admission is $10.00 and this is a Cascade Blues Association co-sponsored show, so do not forget your membership card to receive a $1.00 discount at the door.

And if you miss out on Tuesday, or if you just cannot get enough, head out to The Birk Wednesday, October 8th for an early dinner show at 7:00 pm. The Birk is located at 11139 Hwy 202 in Birkenfeld, Oregon.