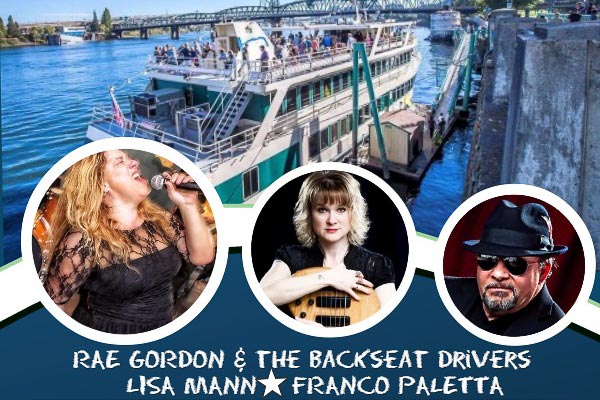 What can be better than a day on the Portland Spirit, floating along the Willamette River, dancing and listening to the sounds of some of our region’s finest blues musicians? This October you’ll have the opportunity to experience three decks of gut-crunching, soul-lifting blues and also help raise funds to send the Cascade Blues Association’s Journey To Memphis winners to Tennessee to compete in the International Blues Challenge in late January/early February.

The Portland Blues Cruise was the brainchild of Rae Gordon while she was searching for a way to raise funds for her band’s trip to the IBC several years ago, and it was so popular and successful that it’s carried on now to its third year. Rae and her band, The Backseat Drivers, will once again be representing the CBA in Memphis, so they’ll be working the main stage on the middle deck of The Portland Spirit. Solo winner David Pinsky and Youth Showcase entry Timothy James will be featured on the top acoustic deck. Also helping out will be former CBA IBC artists Franco Paletta, Blues Music Award winner Lisa Mann, and other special guests who will be sure to add to the fun.

The Portland Spirit will be decked out in a Memphis theme, including food that can be purchased on board. This year’s Portland Blues Cruise will depart on Saturday, October 8, from Tom McCall Waterfront Park, 750 SW Front Avenue, at 3:00 pm. Boarding gates will open at 2:30 pm. Tickets are now on sale through Tickettomato.com for $25.00. Admission will be $30.00 on site, but best to buy in advance as this event will more than likely sell out.

(Please Note: For those folks who are planning on attending the Oregon Music Hall of Fame show that same night, you’ll have time to do both! The Portland Spirit will return and unload at 5:00 pm, giving ample time to head off to the Aladdin Theatre).