You are here: Home1 / Journey to Memphis2 / Portland Spirit to Again Host Party for Blues Acts Going to Memphis –...

On October 3, The Portland Spirit will again host the Cascade Blues 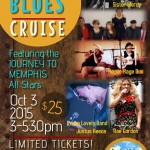 Cruise with excited partygoers and the winners of Cascade Blues Association’s Journey to Memphis contest held this last July at the Waterfront Blues Festival: Sister Mercy, Rogue Rage Duo and Justus Reece (Youth).  The J2M contest sends acts every year to the International Blues Challenge (IBC), a renowned contest held every January on Beale Street in Memphis.  In addition to the acts that will represent the CBA, Rae Gordon (last year’s band winner & IBC Semi Finalist) and Karen Lovely (2010 2nd Place IBC Winner) will be aboard as well. The Spirit sets off from the Willamette waterfront at 3 pm.

People who missed the boat for last year’s cruise still talk about the party they missed,  but you won’t have to imagine what you missed since you will be there this time.

Help bring the Northwest blues scene international exposure and glory by supporting those acts the Cascade Blues Association sponsors and sends to the International Blues Challenge. Above all though, support live music by setting sail on October 3.

Last year’s Journey to Memphis winner Rae Gordon Band used the band’s prize money to rent the boat. The Portland Spirit was open to the idea of bringing some great exposure to Portland, its vibrant blues scene, and its dedicated blues association. RGB was able to use the money to pay guest bands and helpers on the cruise and best of all, send the bands to Memphis and pay for their lodging. When the Portland Spirit approached her to do the cruise again, even though she wasn’t competing, she jumped at the chance, as a musician helping musicians.  She knew all to well that the most important thing is for the acts to be able to concentrate on their musical performances in Memphis, not how to raise the money to get there.

So, mark your calendars now for October 3, but buy your tickets early as the Portland Spirit does have a guest limit and you don’t want to miss the boat! You can find more information on the Spirit here: http://www.portlandspirit.com. Tickets for the cruise may be purchased at www.casacadebluescruise2015.brownpapertickets.com. See you there.