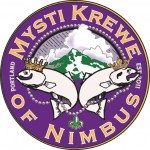 The theme for 2016’s Mardi Gras party will be announced on January 6, or Twelfth Night, and The Ball will also include a costume contest and the crowing of the Mardi Gras King and Queen, along with free traditional king cake for attendees.

For tickets go to: www.wonderballroom.com/event/1021463-mysti-krewe-nimbus-6th-annual-portland. More information and pictures from previous years can be found here: www.portlandmardigras.com

The Ball sold out last year, so we encourage you to get your tickets early.