Everything I Need
Self-Produced 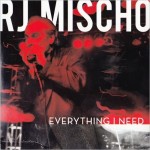 R.J. Mischo may have moved from Minnesota many years back now, and has landed in both California and Arkansas in the ensuing years since, but he has always maintained a great relationship with those he’s worked with in the Midwest as he is often joined by former bandmates guitarist Jeremy Johnson and keyboard master Bruce McCabe, along with a number of other pals like Little Frank Krakwoski on guitar, Billy Black on bass, percussionist Richard Medek, and Victor Span on drums, there to give him a needed hand whenever the call is made.

Mischo returned to the Twin Cities to record his latest release Everything I Need and indeed made the call to all of those aforementioned friends. And as you would expect from “The King of a Really Good Time,” Mischo delivers more of that delicious, classic sounding blues that he’s known for. St. Paul may not be too far of a stone’s throw from the Windy City, but these tracks sound as if they came directly from the South Side of Chicago, with harmonica work that would make Sonny Boy, Little Walter or Junior Wells proud. In fact, he does a couple tribute pieces in the styles of two heroes, “Little Walter Shuffle” and “Big Walter Boogie.”

For his twelfth recording, Mischo wrote nine original tracks and offers three covers, including Buster Brown’s “Sugar Babe” and Muddy Waters’ “Got My Brand On You.” Whether he draws strong harp instrumentals such as “In & Out Boogie” or chilling “Soul Swamp” or his insightful songwriting that may lament the downside of a cheating woman as on “Leave Your Man” where he states that you left your last man for me, you’re likely to do the same thing to me for somebody new, R. J. Mischo brings the blues to life. And whether it’s a Chicago-based track, a swampy feeling piece or even a West Coast groove filled with pounding rhythm as on “Keep On Lying,” this is true blues as displayed as only somebody who has been churning out one great album after another and sweating out his music on stages from one side of the country to the other only can. R.J. Mischo just does not put out mediocre blues recordings; always top notch every time out. Everything I Need is not an exception to that path.