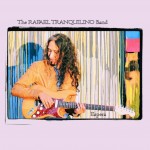 When you think of smokin’ hot blues guitar playing, Mexico City is probably not the first place you’re going to think of when listing where such musicians originate from. In fact, when I was speaking to Rafael Tranquilino in Memphis in January, it did not sound as if there was much blues being played there at all. But somehow, Tranquilino became enchanted with the music, and now residing in the Seattle area, his love for the powerful, rockin’ blues has helped him develop into one of the hottest young string bluesers on the West Coast. And he often mixes in his native Spanish language into his songs that helps make his style quite unique. His latest release Espera is a well-crafted example of everything that makes Tranquilino an artist to watch.

This is blues that often comes across with a bite and an edge to it. Stinging guitar work that has influences coming straight out of the Stevie Ray Vaughan songbook, but never actually imitating the master, as is apparent in his number “Stevie.” That piece captures the mood of Vaughan, but there is also kind of a little surf riff that arises in it as well. And by no means is that Texas blues approach the only angle that he plays from, there is a wide mix of range throughout the disc from heavy-hitting to very moody. Tranquilino’s slide playing is showcased in the opening track “Back Down, Engine Town” and on “Take You For A Ride” the mood is powerful with sizzling fret magic as you realize the ride you’re going on is going to be white knuckled. And that is a common feeling throughout Espera, with perhaps the finest moments displayed on the handful of instrumentals found scattered throughout the album.

Aside from Tranquilino on guitar, the band is made up of three sensational ladies, Lissa Ramaglia on bass, Eva Dizon on drums and Leah Tussing providing vocals on three tracks and songwriting credits on two. Tussing’s voice is quite hypnotic on “Do You Want Me?” as she implores the man of her desire to “catch me if you can” while telling herself that she “just has to breathe.” Tranquilino once again throws down mesmerizing and fiery playing in a somewhat Jimmy Page-esque manner on the song.

The sudden ending of the final track “Espera/Waiting” leaves you anticipating more. Its driving energy builds you up into a frenzy and that abrupt closure is a tease to get you into listening to the album all over again. It certainly hooked me into doing so.

Tommy Castro And The Painkillers Norman Sylvester & Tevis Hodge Jr Among All Star Cast Helping To Raise...
Scroll to top