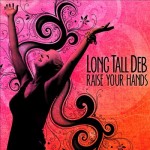 Originally from El Paso, Texas, vocalist Long Tall Deb Landolt moved to Columbus, Ohio a few years back where she instantly became a part of the city’s wealth of blues talent.  Her debut recording for the VizzTone label features many of that city’s most renowned artists as well as a bevy of others from across the country. The album, Raise Your Hands, is a sensational collection showcasing the collaboration between herself, keyboardist John Popovich and bass player Melvin Powe that had built through a standing Wednesday night idea gathering meet.

Raise Your Hands offers ten original tracks, most of which were penned by the main trio with a hand from people such as Sean Carney, Dave Clo and Philip Pemberton. The other two numbers on the disc are cover tunes by Tom Waits (“New Coat Of Paint”) and Ian Moore (“Muddy Jesus”). The guests appearing on this recording are phenomenal in itself; almost like a modern day who’s who that includes Sean Carney, J.P. Soars, Victor Wainwright, Damon Fowler, Jimmy Thackery, Shaun Booker, Reese Wynans, Colin John, Big Llou Johnson, Bart Walker and the Roomful of Blues Horns amongst many others.

Highlight selections have to include the opener “What Would A Good Woman Do” where Deb and Philip Pemberton trade thoughts on relationships and what works and what will definitely not. The Roomful of Blues’ Horns and keyboard work by John Popovich on “Finally Forgot Your Name” emphasizing Deb’s voice is chilling and mesmerizing; the thoughts of how much freedom she offers herself being “Married To The Blues” with Big Llou providing the wedding ceremony; the trade of lead vocals on the gospel-inflected “To Find His Home” with Shaun Booker and Nikki Scott; and “Hush Your Mouth” with its funky message of knowing about your betrayal and that nothing sounds sweeter than when that fool finally shuts his mouth.

Raise Your Hands is a first-class debut album from a strong performer backed by an all-star cast. Don’t be led astray, though. There may be a stellar collection of friends here, but they do nothing but enhance Long Tall Deb’s vocal talents. Superb songwriting and presentation make this a true winning recording. Can’t wait to see what she comes up with next.