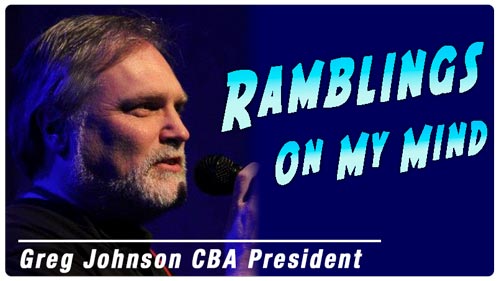 As we roll into 2016, I want you to take a close look at the header on the front page of the BluesNotes. Right there where it says Volume 30. Yes, everybody, that is correct. The Cascade Blues Association will turn thirty-years-old this next year. And though it doesn’t occur until late in the year, let’s find reason to celebrate the fact the entire year long. Your board of directors will come up with ideas to help note this occasion, and I am certain that as we have in past anniversary dates we will have to put together a special event to truly mark this plateau.

There have been a lot of peaks and valleys throughout the existence of the CBA. More good than bad, but that is pretty much the nature of any business. And we are indeed a business. As the song goes, “The blues is our business and business is good!” We might see pitfalls with venues closing or the passing of a beloved musician every now and then. But Portland really does remain vital in the blues world. We have residing amongst us some of the finest musicians in the world, who keep popping up in award shows like the Blues Blast or Blues Music Awards. And despite losing a venue here and again, look at our calendar each month and compare it with most cities that have blues organizations and you’ll recognize that we have far more going on than a lot of places out there. A lot of that has to do with you, our members, who go out and support our artists and clubs.

Personally I have been a member of the CBA for most of those thirty years. I was approached by a friend involved with the creation of the group who asked me to join way back that first year. Unfortunately, I was working two jobs at the time and felt that I had little time to offer, but still attended meetings and events when the time would allow. I started getting more involved in the early 1990s and by the last few years of the decade was spending a great deal of more time around the organization, first writing articles for the BluesNotes, then under the suggestion of both then President Rick Hall and Vice President Val Davis made the plunge to join the board. It was during the tenth year celebration period when I did and taking on the President position myself a short few years later, found myself presiding over the fifteenth, twentieth, twenty-fifth and now looking at the thirtieth anniversaries. 2016 marks my fifteenth year as President, something that when I first took it on I felt that I didn’t have the time to sufficiently give. Former President Erroll Shervey told me that first year that now you’re in it you’ll never be able to give it up. Of course I laughed at the remark at the time, but oh my, here I am now and still in the position. No complaints mind you, it is a pleasure to be recognized with such a fine organization. And, of course, I really still don’t have the sufficient time, but I seem to be doing more and more every year. Go figure?

I am hoping that 2016 is the beginning of yet greater things to come with the CBA, for instance, revitalizing our Blues in the Schools program. Bringing the attention of the blues, or any music for that matter, is vital in our school education system. We must not let it get away from us. But we need people who wish to handle the program. We can also use more people involved with our board of directors. At the moment there are only eight of us, and we cannot tackle everything we’d like with a small group. You do not have to be on the board for that matter to get involved. We are a volunteer organization and if you would like to assist in our programs but not be on the board we can surely use your help that way, too. Remember, the Cascade Blues Association belongs to everybody. And the more involved the stronger it can become. There is no elitist group that determines who belongs and who does not. You’re all welcome. And we intend on supporting everyone as well, musicians and venues alike. Nobody has the taste to like everything they hear, but that is okay, we’re not hear to judge one over another, our job is to let others decide what they like and to let them know where they can find it. That is why we have the BluesNotes Calendar and the Bandstand features, so you can let people know yourself. And it’s all free to use, just report your information to us by the 15th of each month and we’ll get it in there for you. Please let us work for you. It’s a win-win situation for all.

2016 is going to be a good year for the blues. Especially if we support everybody! Let’s make it happen and who knows, we just may be celebrating the beginning of another thirty years of the Cascade Blues Association. But I will tell you right now, I don’t intend to being around as your President thirty years from now. But I am enjoying it while it goes on.

Andy Stokes Music Has Been Serving Up A Funky Sound in Portland for Over 35...