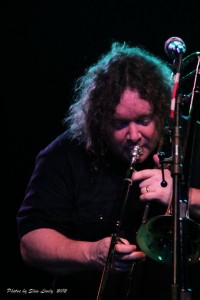 Randy Oxford is a Northwest Legend. He has worked with such outfits as Little Bill & The Bluenotes, Fat Cat and Junkyard Jane prior to taking on the calling of leading his own band. The Randy Oxford Band has gone through several line-up changes over the years, but they have always been consistent on putting out exciting stage performances and excellent CDs. They have represented the Northwest multiple times at the International Blues Challenge and their last trip found them amongst the finalists (actually Randy’s second time as a finalist as he reached this plateau with Junkyard Jane also representing the Cascade Blues Association).

With a new band that may just be his strongest yet, and a new CD, It Feels Good, Randy and the band will be making an all too rare appearance in the Portland area at The Lehrer, 8775 SW Canyon Lane, Beaverton, on Saturday, November 23rd at 9:00 pm. The band will consist of Randy Oxford leading the group on trombone, the incredible Jada Amy on vocals, the twin guitars of Randy Norris and Manuel Morais, and new to the group on bass Polly O’Keary who has led her own popular band in the Seattle area and most recently was a member of Too Slim & The Taildraggers. This same group will once again be heading to Memphis for the International Blues Challenge representing the South Sound Blues Association in Tacoma. The Randy Oxford Band is always a treat to behold and with this group, The Lehrer will be alive with sensational grooves certain to bring the audience to their feet. Admission is $10.00.