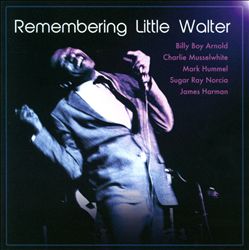 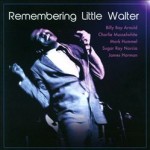 Without question, Little Walter stands heads above just about every blues harmonica player in history when it comes to innovativeness and technical creativity. He took the instrument to new heights charting several hit songs and influencing generations of players for years to come, even still 45 years after his passing.

Little Walter is often the focus of many tributes, therefore, it only seems natural that Mark Hummel would decide to offer such in his popular Harmonica blowout series early in 2012. Those shows caught so much enthusiasm that they decided to record the event on a special night in December at a dinner theater in San Diego with five of the highest respected harmonica artists in attendance: Charlie Musselwhite, Billy Boy Arnold, Sugar Ray Norcia, James Harman and of course Hummel himself.

Each of the musicians selected their own personal favorite Little Walter numbers for the show and the recording, Remembering Little Walter, offers a pair from each. All are stunning recreations of Walter’s genius and many of his best known tunes are included, such as “You’re So Fine,” “Crazy Mixed Up World,” and “Blue Light.” All of the harpers also take their own solo during the finale of “My Babe,” Walter’s most recognized song.

Hummel who produced the show, also made certain to include some of the absolute best musicians to play alongside the harp masters. Guitar players Little Charlie Baty and Nathan James trade mighty fine licks, while bassist R.W. Grigsby and June Core on drums lay out the ideal rhythms to fuel Little Walter’s music. Baty even gets into the harmonica scene of the show himself, throwing down his own solo during “My Babe.”

Remembering Little Walter is definitely a treat for all fans of Little Walter’s material and blues fans in general, not only those who enjoy harmonica blues. These Harmonica Blowouts are always tasty and fun, and that carries over exceptionally well here. First rate start to finish and a treat to hear. This one is recommended with high applause.

The McCrary Sisters
Scroll to top