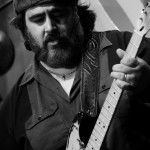 World-renowned, 16-time Blues Music Award nominated Nick Moss has honed his craft with a class of blues legends, including luminaries like Buddy Scott, Jimmy Dawkins and Jimmy Rogers, over the last twenty years. Considered one of the premier blues acts out of Chicago, the Nick Moss Band is currently touring in support of his latest release, Time Ain’t Free. Along with Nick’s incendiary guitar work, the band also features the stellar vocals of Mike Ledbetter, as they infuse rock, R&B and soul into their ultra-solid blues and roots foundation.

Always a well-received act whenever they come through the region, the Nick Moss Band will be performing three times in our area. On Wednesday, June 11th, the band will play at The Birk, 11139 Hwy. 202 in Birkenfeld, Oregon. Admission is a donation to help support the venue. Call 503-755-2722 for show time and further information. Then on Thursday, June 12th, the band will roll into the new Duff’s Garage at 2730 NE 82nd for a 9:00 pm show. Admission is $12.00. This is a Cascade Blues Association co-sponsored event, so don’t forget to show your membership card at the door to receive a $1.00 discount. On Saturday, June 14th, Nick Moss and the guys will be the headliner at the Yakima Blues & Local Brews Festival (see separate article for information about this new festival).

If you’ve never seen a Nick Moss Band performance, this is a not to miss opportunity to catch one of the blues world’s finest bands. Guaranteed a great night of music every time out.

Ramblings On My Mind 27th Annual Safeway Waterfront Blues Festival has a Spectacular Kickoff on July...
Scroll to top