Nobody But Me
Electro-Fi Records 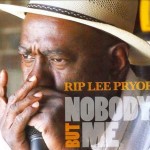 If traditional blues is what you’re looking for, then Rip Lee Pryor’s Nobody But Me is about as authentic as you’re going to find. This is bare boned music and when I say bare boned I mean right down to the marrow. Most of what you’ll hear here is simply Pryor, his harmonica and guitar telling a straight-forward story without heavy embellishments with his guitar. His harmonica playing takes you right back to the influences of both his father, the legendary Snooky Pryor, and Sonny Boy Williamson II. This is sitting on your porch or in the back corner of a smoky bar stripped down where you might be playing just for your enjoyment music. Where you might occasionally draw somebody else to be inspired to sit in along with you. That’s how most of the disc comes across, while there are a few numbers where Pryor is joined by a bass and drummer (Alec Fraser and Bucky Berger respectively), it is mostly the emperor’s new clothes baring everything for all to see. And though it comes across as down-home country blues, Pryor is delivering his music from the big city of Chicago. The music of the Maxwell Street performers may come directly to mind when listening to Rip Lee Pryor.

Nobody But Me is Pryor’s debut recording for the Electro-Fi label, the same company that issued his father’s records for several years until his death. The song selections cover five of his father’s compositions, three from Sonny Boy and an Elmore James number. The remaining three tracks are his own originals. But the raw feel of the numbers is all Rip Lee Pryor. Even if it’s a song everybody knows and loves in its original rendition, Pryor strips it down and recreates it as his own. “One Way Out” for example, reminds me of Duster Bennett’s version of the same song. A man, his guitar and a harmonica in a rack. Whereas Bennett’s take may be more upbeat, Pryor still brings across the spryness of the song in his own manner.

Rip Lee Pryor may be a throw-back to earlier musicians, but this is a man sharing his blues. And it doesn’t get much more real than this.