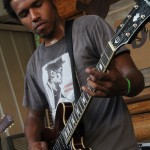 New Orleans-based singer/songwriter Benjamin Booker will be returning to the Doug Fir Lounge on August 8 for what is certain to be another exhilarating and energetic performance. Booker’s sound has grown out of his old love of hardcore bands and his new life in the Big Easy. Embracing both Black Flag and the blues, he creates music with a fresh take on traditionally heavy genres. Audiences will be witness to a sound that’s urgent, emotional, and ball -breaking. It’s gritty like late 60s punk Detroit, but in the end, this is a young artist who’s a true blues man, whom The Independent newspaper has described as “frenzied guitar-strumming and raw, soulful vocals that are hair-raising in intensity.”