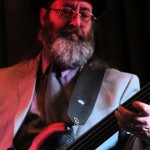 In 1951, the year Fender started selling electric bass guitars, bass player Rob Shoemaker was born in Philadelphia. Coincidence? Makes you think. When he was a kid, his family moved around, starting in upstate New York. Then to the Chicago area from 4th grade through high school. Then all over the west before finally settling in Portland in 1977 and blessing our blues music scene.

“My Mom was a good, serious piano player. She played every day. My parents always had classical music playing, either on the record player or the radio.”

“I was raised on Chicago radio: listened to rock and roll on WLS and WCFL; listened to blues on WOPA and WVON; listened to jazz on WGRT; and listened to classical music on WFMT. I would sit by the radio and try to play along with everything. I listened to Chuck Berry, the Ventures, the Stones, the Beatles, Muddy Waters and B.B. King, Elvis, all the Motown stuff, James Brown, the psychedelic bands like Jefferson Airplane, Sly and the Family Stone, Freddie King, Albert King, Albert Collins, Buffalo Springfield, you name it. The first bass players I tried to imitate were Bill Wyman and Paul McCartney, then I found out about Willie Dixon, James Jamerson, Jerry Jemmott, Duck Dunn, Jorma Kaukonen, and Larry Graham. I later began to listen to jazz bass players like Ray Brown, Charles Mingus, Jimmy Blanton, Milt Hinton, Ron Carter, Richard Davis, and Leroy Vinegar.”

When describing his own music style, Rob says, “Bass has the same role in pretty much any style of music. The bottom end defines the harmony of the song, knits the melody and the rhythm together. The bass gives the other musicians and singers the framework to build the songs around.”

Although Rob is a bass player now, he started his music training by playing French horn in fourth grade. “The band director, Mr. Koerner, was a wonderful teacher who had played trumpet in marching bands in the Army and Ringling Brothers. I learned to read music and learned teamwork in the school band. The junior high school band director, Mr. Hoffman, was just as good.”

“When I started playing bass, I had a music-minus-one Ventures record that came with a book, and I also had the Carol Kaye bass instruction books. My ears got good enough to learn which notes to play by listening to records. I watched all the live music I could so I could see what the bass players did with their hands, and I would pester bass players with all sorts of questions about what they were doing.”

Rob is the bass player on all four of Norman Sylvester’s albums, and is in the process of completing a fifth CD with him. He recently played bass on Tommy Hogan’s Howl Like the Wind album.

“In junior high and high school I was in a band called the Lonely Souls. From sophomore year on, we worked two or three nights every week and nearly every day during summer. After high school I knocked around with dozens of bands. I started playing with Kate Sullivan shortly after moving to Portland. Also played with Marvin C. Faith, Sheila and the Boogiemen, John Borroz, and Buzz Clifford, before the Norman Sylvester Band got going. I’ve played steadily with Norman for 30 years now,” Rob said.

His son, Paul Shoemaker, has been the full time drummer for the Norman Sylvester Band for the last four years. “The late Carly T. Helgerson, an excellent harp player, had a lot to do with establishing our sound in the beginning. When Norman’s oldest daughter, Lenanne, began to sing with the U of O gospel choir, he began to use her for high profile gigs. Lenanne was soon joined by her cousins, Rhonda and Estherlita Hill. Other singers include Myrtle Brown, Gretchen Mitchell, Sarah Billings and LaRhonda Steele.”

“I love this music, and I love entertaining anybody who wants to hear it.” To hear Rob play, check out the Norman Sylvester Band at one of our local venues. You’ll find more information at their website, normansylvester.com.