Matt Miner Presents and O’Connor’s Vault welcomes roots rockers Rich Layton & The Troublemakers with special guest Jon Koonce to the heart of Multnomah Village, Friday, March 3 at 7:00pm. Both Rich and Jon are dedicated “keepers of the flame” for American roots music. When they join forces, the fuse is lit for a night of high octane swamp rock, country, rockabilly and the honky tonk blues!

Rich Layton & The Troublemakers echo the sound of an East Texas roadhouse. With comparisons to such artists as Marty Stuart, Dave Alvin and JD McPherson, the band’s live shows take audiences for a ride from Sun Studios to Chess Records, and Muscle Shoals to Bakersfield. Rich’s original songs thread seamlessly into the mix, weaving his Gulf Coast roots through tales of rock and roll redemption, harmonica-fueled and swampified. 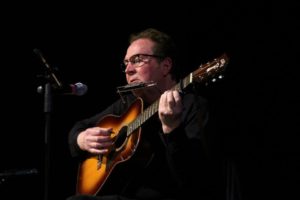 Together a decade now, the band has released two albums, and performs at festivals and events throughout the NW, including the Safeway Waterfront Blues Festival. Each summer, Rich joins Lyle Lovett as a special guest when The Large Band comes to town. Rich also has played on Portland tour stops by his friends Lucinda Williams, Dale Watson and the late Buckwheat Zydeco.

Jon Koonce is an Oregon Music Hall of Fame member for his early work with Johnny and the Distractions, and has just released his 13th album, The Lost Cause. Since the seventies Jon has built parallel careers fronting rock bands and singing his own songs solo on acoustic stages across the country. His gritty blue-collar approach to rock carries over in his solo work with strong unabashed statements about right, wrong, truth and justice, supported by clean, clear energetic guitar work.

O’Connor’s Vault, 7850 SW Capitol Highway, is a friendly, comfortable neighborhood music venue offering a full restaurant menu and full bar. Tickets for this event can be purchased in advance at Brownpapertickets.com.

Corey & the Tribe Presenting A Diverse Taste Of Musical Styles