Montana-based blues rockers, The Kenny James Miller Band will be making a rare trip down to the Portland area for a pair of shows the first week of February. This Inland Empire Blues Society award winning band is a favorite throughout Eastern Washington, Montana and Idaho with their high energy performances known for keeping audiences entertained and asking for more each and every night. The trio consists of guitarist/songwriter Ken Sederdahl, drummer Mark Miller and bassist Mark Cornett. They are a tight outfit playing mostly original music sure to appeal to fans of bands like Robin Trower, ZZ Top or Government Mule. With one album under their belts, Revelator, they have recently been selected to be showcased on Montana PBS’ Emmy winning show 11th & Grant that documents the best bands in the state, airing this spring. 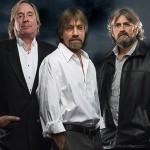 The Kenny James Miller Band will be playing at Duff’s Garage, 2530 NE 82nd, for a 9:00 pm show on Thursday, February 5th. This is a Cascade Blues Association co-sponsored event, so remember to show your current membership card at the door for a $1.00 discount.

Then, on Friday, February 6th, the band will be on the West Side of town, performing at Coach’s Bar & Grill, just off the intersection of Hwys 26 & 217, at 10162 SW Parkway, for a personal friend’s birthday celebration. Showtime is 9:00 pm, contact the venue for admission and further details.