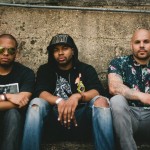 Seattle guitarist Ayron Jones’ playing style has often been compared to that of Jimi Hendrix and Stevie Ray Vaughan with perhaps with a hint of Nirvana and a touch of hip-hop. In other words, it’s old school and modern combined with an edge of attitude. His blues-rock guitar is filled with raw energy as he leads his three-piece outfit The Way and has been drawing a lot of attention throughout the Northwest and beyond, opening shows for artists like BB King, Robert Cray and Robin Trower, to being a feature performer at festivals like Sasquatch, Bumbershoot, and the Waterfront Blues Festival.

On Friday, February 19, Atron Jones & The Way will be performing in a twin-billed performance at The Star Theater with Portland soul band Dirty Revival. This is a 21 & over only concert, with show time beginning at 9:00. Tickets are $12.00 and available through TicketWeb.com. The Star Theater is located at 13 NW 6th Avenue.