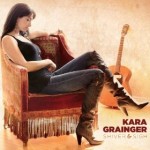 Kara Grainger, an Australian artist who now resides in Los Angeles, has released an outstanding new CD titled Shiver & Sigh, that showcases her talents as a singer, songwriter and guitarist in the utmost way. It also lets listeners know that she can cover a wide range of stylings and emotions, too. The disc is an eclectic mixture of blues with roots and pop sounds, plus a little bit of country flavoring tossed in just for good measure. It is such a clean sounding recording, very well produced by David Z, best known for work with high profile artists such as Buddy Guy, Ana Popovic and Jonny Lang, amongst many more.

Eclecto Groove is an off-shoot label of Delta Groove Records, so you just know that Kara had access to some of the finest musicians in their fold. So for this disc she brought in a tight band that offers the skills of people like Kirk Fletcher, Mike Finnegan, Jimi Bott, James Gadson and Josh Sklair, plus The Pacific Coast Horns. A very impressive grouping to say the least. Grainger’s soulful vocals and exquisite guitar work make it all come together.

She shows a wide range of guitar work covering traditional styles with her takes on Robert Johnson’s “C’mon In My Kitchen” and a sensational take of “Breaking Up Somebody’s Home,” to more modern numbers like Mike Zito’s “Holding Out For Love,” or the soft emotion of Wayne Perkins’ “Overdue For The Blues” that closes out the disc.

The opening track, her own composition, “Little Pack Of Lies” may bring to mind artists like Sheryl Crow, Kirsten Thien or Bonnie Raitt, but Grainger is an exceptional musician and as you listen to this fine collection of songs you start to realize that  her own voice needs no comparisons.

Grainger has a way to draw you into her songs. The title number, “Shiver & Sigh” masterfully written by Kevin Bowe, is such a tune. You can feel the emotion through her vocal delivery. You sense the strain of unattainable love as she sings of an appeal that causes her heart to throb from within her soul of the person she cannot deny. “You’re the one who keeps the sun shining on the outside, but keeps raining in my mind, makes me shiver and sigh every time he passes by.”

You may feel the same every time you listen to this album, shivering and sighing to the beauty and the craft created by Kara Grainger. Shiver & Sigh is an exceptional release that should be taken note of. Very highly recommended for those who enjoy artists who ride the fine line of cross-over soft rock and blues. Appealing and sounds terrific!