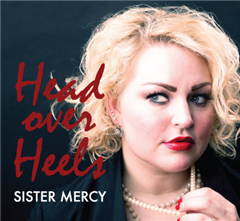 Sister Mercy is a band that has deep roots in the Portland music scene featuring former members of the local favorite act The Rose City Kings and introducing to the region’s blues scene the sensational voice of April Brown. Originally from Los Angeles, Brown has worked renowned rooms in that city including The Whiskey and The Roxy, as well as being trained in comedy.

You may have caught Sister Mercy this last summer at the Cascade Blues Association’s summer picnic and will remember the fiery and exciting set they delivered. The band has just finished recording their debut CD, titled Head Over Heels and to properly celebrate its creation they have booked a CD release party at The Star Theater, 13 NW 6th, on Sunday, December 14th, for a 7:00 pm show. Portland musician Jennifer Smieja opens the show. This is a 21 & over only show with tickets available through TicketBiscuit.com for $10.00 admission.