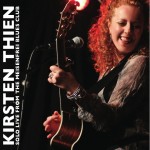 New York City-based blues artist Kirsten Thien is most often found touring with a full band to compliment her amazing vocals, but this new release, Solo Live From The Meisenfrei Blues Club finds her baring herself alone on the German stage armed with only her guitar and voice. It is quite intimate and she has a very receptive audience. Kirsten is an engaging performer, always smiling and giving the impression that she is having a good time that is reciprocated by those in attendance.

Solo Live From Meisenfrei showcases Kirsten with numbers from her three previous releases, with focus on a handful from the last disc Delicious. Kirsten explains before going into a sensational take on Sheryl Crow’s “Leaving Las Vegas” that her definition of blues is pretty diverse, and the selections here, whether her own compositions or covers, showcases her tastes and knack for story-telling songwriting. Original numbers like “A Woman Knows,” “Thank You (For Saying Goodbye)” “Nobody’s Ever Loved Me Like You Do” and “The Sweet Lost And Found” are perfect examples of tracks that could cross-over between rock and blues genres.

She has also included a handful of cover numbers that are perfectly spread throughout her performance that enhances the show and fit nicely with her own material. They each have their own personal reason for being included, many dealing with relationships both good and bad. She explains how she often thinks about Sippie Wallace’s words about not advertising your man as she coaxes a little audience participation on “Woman Be Wise” and mentions that she has a thing for bad boys before taking on Elvin Bishop’s “Fooled Around And Fell In Love.” There are also superb versions of Leon Russell’s “I’d Rather Be Blind” and Bob Dylan’s “It Takes A Lot To Laugh, It Takes A Train To Cry.” And she finishes her show with a medley of Bill Withers’ “Ain’t No Sunshine” mixed with B.B. King’s “The Thrill Is Gone” that leaves the crowd ecstatically pleased.

Solo Live From Meisenfrei Blues Club is very enjoyable performance from an artist that knows how to capture an audience and proves she can do just that with or without her band. She makes the crowd feel as if they’re sitting in their own homes witnessing a private performance. It is personal and heartfelt, a very welcome release from Kirsten that will be highly valued by anybody who has ever attended one of her shows before. And for those who have not had that pleasure, it’ll have you writing that down on your bucket list for certain.

Hold Onto Me / A Woman Knows / Thank You (For Saying Goodbye) / You’ve Got Me / Wild Woman Don’t Have The Blues / The Sweet Lost And Found / Ain’t That The Truth / It Takes A Lot To Laugh, It Takes A Train To Cry / Please Drive / Leaving Las Vegas / Nobody’s Ever Love Me Like You Do / Woman Be Wise / Fooled Around And Fell In Love / I’d Rather Be Blind / Medley: Ain’t No Sunshine – The Thrill Is Gone