You are here: Home1 / Cascade Blues Note2 / Soul, Blues, Funk, Jazz and R&B Blend Together Seamlessly In the Music... 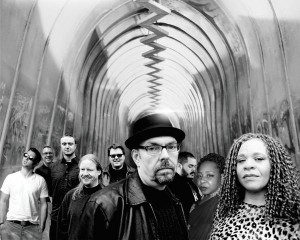 “If Lenny Kravitz and Aretha Franklin met at the intersection of James Brown Blvd. and Sly Stone Way, while listening to Tower of Power covering an Average White Band tune…yeah, that about covers it.” Those are the words of Ken DeRouchie when talking about his music. An artist that describes his music that way, is a band you just gotta hear.

Ken’s passion started early, when he was only two years old and started playing drums. By the time he was 16, he was playing local shows in his hometown of Detroit, Michigan. When he was 18, he was hired to go on a North American tour with Larry Norman and the Young Lions. A year later he got his first record deal. He is living his dream—he’s wanted to play music his entire life.

He is basically self-taught, but did play some in the school band. He confesses, “I don’t read music.” When performing live, Ken plays guitar and sings. On recordings he plays guitar, bass, keys, drums and sings.

Musical influences are a huge list, according to Ken. “My favorite band is Steely Dan—I think Walter and Donald are geniuses; Lenny Kravitz—one of his songs was the inspiration for the title track of Muse); Galactic; Ray Charles; Aretha Franklin; Gladys Knight; Tom Waits; and sooooo many more.”

CBA President Greg Johnson reviewed the CD Muse and had this to say, “Ken DeRouchie is an incredible songwriter. His material is filled with emotional tales reminiscing of personal love, both found and lost and covering all points in between, all forever cherished. And like the best songwriters he has used these experiences to express himself in his art. This is his muse that has proven to be the theme of this album.”

In addition to these CD’s, Ken also has some Indie movie soundtracks and Indie video game soundtracks. He is working on material for a new disc, hopefully out in 2015.

Ken has received praise from publications and radio stations around the world, but local legend, Steve Pringle of KINK FM, sums it up best. “Ken and his band bring it each and every night. Horns that moan and wail, guitars that grind and soothe and a rhythm section tighter than a frog’s ass. The KDB has a story to tell, pull up a chair.”

To find out where to see the Ken DeRouchie Band for yourself, visit their website at www.kdband.net.