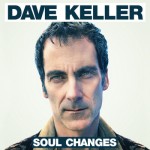 Following up on his sensational 2011 release Where I‘m Coming From that garnered recognition with being named the Best Self-Produced CD of the year by The Blues Foundation, Dave Keller wasted no time in putting together another stellar recording with Soul Changes. Recorded in both Memphis and in Brooklyn, this disc places Keller amongst the top in the business when it comes to oh so perfect soulful singing.

For his sessions in Memphis, he went to the best. Recorded at Royal Studios, whose output included all the greats from folk like Al Green, Ann Peebles, Syl Johnson and Otis Clay, he also teamed up with the studio’s legendary Hi Rhythm Section of Teenie Hodges on guitar, Leroy Hodges on bass, and Charles Hodges on organ, along with recruiting the great Bobby Manuel on guitar. The talent rubbed off in the right way for Keller as his original tracks here come across every bit as soulful and tasteful as those recorded by the masters back in the ‘60s and ‘70s.

Special note for original songs like “17 Years” that describe the pain of a failed marriage, the tenderness of the ballad “One More Time,” the catchy chorus of “I Wish We’d Kissed” and The Royal Horns on “Searchin’ For A Sign” make it easy to imagine Al Green doing this song, but Keller is simply amazing on all these self-penned tracks.

In Brooklyn, Keller employed the New York-based band The Revelations to provide his backing. The five numbers offered from these sessions are all covers of songs that are personal favorites of Keller’s. Numbers by The O’Jays, Otis Clay and Bobby Womack are included. And though they may be recognized numbers in their original incarnation, Keller takes them a step further marking them as his own. Take a song as well-known as Smokey Robinson’s composition for The Temptations, “Don’t Look Back,” it retains all of the original feel, but Keller’s presentation comes off just as strong in its own right. To take songs that are so well recognized and bringing yet new life to them is a masterful feat in itself. Keller does that kind of justice to all of these covers.

In a year that saw brilliant releases in the soul-blues genre, Dave Keller has accomplished a spot right near the very top alongside Otis Clay and Johnny Rawls. Not only one of the finest soul recordings of the year, Soul Changes is one of the absolute best releases of any genre. Hands down a winner!