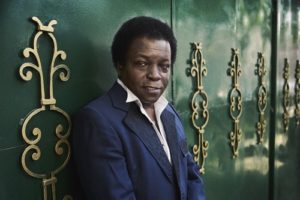 Apologies to the late, great James Brown, but you’d be hard pressed to find another singer who’s ever worked as hard as Lee Fields — a man who’s been making soul and funk anthems since 1969. Since that time, he has toured the world with musical legends like Kool and the Gang, Sammy Gordon and the Hip-Huggers, O.V Wright, Darrell Banks, and Little Royal; he’s recorded with French house DJ/producer Martin Solveig, and somehow has found a newer, younger audience, becoming more prolific as the years transpire. Fields flexes those strengths on his most current recording Special Night, where you’ll find some JB-style funk and hints of Stax, Chess, Fame, and Motown. But this is not a throwback. Fields possesses a voice that’s equally raucous and tender, and crafts a truly honest, soulful work.

Lee Fields and the Expressions return to Portland for a 9:00 performance at The Aladdin Theater, 3017 SE Milwaukie Avenue, on Monday, December 5. Tickets for this all ages event are $16.00 advance through Ticketfly.com or $18.00 at the door day of the show. Opening that night will be Atlanta’s Lady Wray.