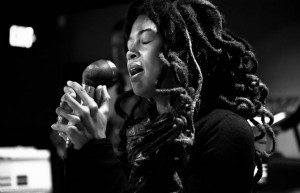 Spirit Mountain Casino is proud to offer inspiring live entertainment, top-notch talent, and an unbeatable venue to experience it all! This summer, join us in welcoming Valerie June, the newest addition to the Songbook Series as she the takes the stage on August 29th.

Valerie June, the maker of ‘Organic Roots Moonshine Music,’ produces a rich sound that redefines stereotypical music genres. Her soulful voice merges the blues with gospel and folk, while her instrumentals are an experimental blend of Appalachian, country, and bluegrass. With a career beginning in Memphis, Tennessee, and has since created music that has garnered the attention of international and American audiences alike.

June’s 2013 release, Pushin’ Against A Stone, earned her a Blues Music Award nomination as the Best New Artist Debut and an Americana Awards nomination as Emerging Act of the Year. Billboard deemed that the album “definitely qualifies as a sonic treat,” and NPR described it as one that “slices across styles and decades of popular music with a cutting canniness.” She has toured with British sensation Jake Bugg and has collaborated with artists like Dan Auerbach of the Black Keys and Booker T. Jones.

Famed for her enchanting presence, she will blow you away on the stage! Songs like “Twined and Twisted” and “Workin’ Woman Blues” are best experienced live… And now, Spirit Mountain is offering you the opportunity to see her perform! Valerie June will be in the house on August 29th at 8PM. Tickets start at just $10. Buy one now to secure your seat at the Main Event Center for this special event.