Gold Mine
Self Produced 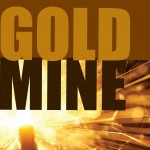 Vicki Stevens and Sonny Hess are a natural combination that really rings true with their first full-length CD, Gold Mine. The album contains seven original tracks penned by Sonny and Vicki, with two covers, and is a sensational follow-up to their earlier EP, Blues Alchemy. Both Sonny and Vicki are award-winning artists in their own right individually, as well as receiving the CBA’s Best New Act Muddy Award this past year for putting this outstanding outfit together. And though Sonny has worked with many of the Northwest’s finest vocalists, Vicki Stevens is by far the best match for her since the tragic loss of Paulette Davis in 1996. They go together just like the Louis Jordan song “Beans and Cornbread,” like strawberries and shortcake, like corn beef and cabbage, like red beans and rice . . . well, you get the picture. The disc opens with a song written by Sonny and the late Paulette Davis, titled “Bad Intentions.” Starting out with a deep bass line from Jim Hively and sultry saxophone from guest Fenix that leads into Vicki’s smooth vocals and Sonny offering a little biting guitar break midway through. It is the perfect song to lead off this fine disc. That’s followed by the title track, “Gold Mine,” where Vicki blows some mighty chunky harmonica while growling the vocals. On “Kiss And A hug,” Sonny brings out the guitar licks that’ll draw you right in. This song is one of two non-originals from the band and was written by Greg Carter. The other cover track is the Burt Bacharach classic, “Baby It’s You,” a completely unexpected number toward the end of the disc that is going to put a smile on your face. “Someone Like You” is a slow blues number again with Sonny shining brightly on guitar. “Saved” has a nice funky pace with more exceptional performances from everyone. Hively’s bass and Kelly Pierce really run the attack on this one, with yet more burning harp solos from Vicki. The song mixture takes on a variety of angles that are fun and often revealing of their own personal experiences, both ups and downs. Gold Mine is an enjoyable outing for a duet that just seems made to work with one another and hopefully it’s a partnership that will continue to release many more as time moves forward. Total Time: 42:16 Bad Intentions / Gold Mine / Kiss And A Hug / Saved / Someone Like You / Crazy / Blues In You / Baby It’s You / Blues Will Getcha