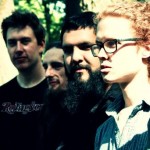 “Still Water Vibes is…putting classic blues guitar, grooving bass lines, funky drumming and ‘Where did that come from?’ vocals into one tight group…With original tunes that bridge the gap of traditional blues and modern blues funk, you’ll find yourself going out of your way to catch another show!” That is how their website describes them, and that description is spot on.

Still Water Vibes, a blues band out of Salem, is made up of: Nick Wixom, lead vocals; Brandon Logan, guitar; Jarred Venti, bass; Mike Windsor, keys; and Derek Jones, drums. Nick and Brandon began working together about five years ago and Jarred joined the group about two years ago. “We met Mike in December 2013 and asked him to join the group. Then in April of 2014, Derek joined. His second public appearance with the group was the first round of the Journey to Memphis Competition,” according to Nick.

BluesNotes: Did each of you always want to perform professionally or if not, what did you “want to be when you grew up”?

Still Water Vibes: Brandon, Derek and Mike currently work in the music industry exclusively. Derek is pursing working as a musician and currently giving lessons out of ABC Music in Salem. Jarred has a day job as a “Beer Czar”, he makes purchasing decisions and manages the beer inventory of two local tap houses in Salem, and has taken some schooling for bass. He also gives lessons on occasion as a private instructor. Nick is a full time employee of the Department of Transportation and operates a small-time sound company. He also provides the sound system that the band uses for shows and recordings. He has the least experience of the group musically, but hopes to build his sound company into a full time career, splitting time with performing.

BN: Do each of you have day jobs?

BN: Who has influenced your music?

SWV: The band has a wide variety of musical influences, each of us grew up around completely different styles of music.

Brandon: His major influences are Joe Bonamassa, early Kenny Wayne Shepherd and Chris Cain. His other influences vary, but his playing lends to a funky groove found in some lesser known BB King music.

Nick: His major influence was the church. Growing up his family played a lot of southern gospel style music—his dad’s side of the family all came from the south and shared a love for performing. Currently he gets a lot of his styling from the likes of Jonny Lang, John Mayer, and Robert Randolph. He loves the style of music that Salem local Ty Curtis writes, as well.

Jarred: He has the widest variety of influences of the whole group. From the Beatles to Led Zepplin and the Red Hot Chili Peppers. He started to really enjoy the style of Robert Randolph and Joe Bonamassa, having been exposed to them through Brandon and Nick.

Derek: His major influences are from local jazz musicians, which is where he got his first opportunities to play in Salem. Derek’s jazz and Latin influences bring a different flair to SWV’s music. His ability to create music from his kit comes from a minimalist take on the instrument from his gigs playing in jazz trios at local jams and street corners.

Mike: Another member influenced by the church. Mike currently plays modern worship style music at church and grew up playing traditional piano for events. His introduction into playing blues and these styles was the day he was contacted to try out for the band. His musical intelligence and hard work has helped him make a big transition from genre to genre.

BN: How would you describe your music?

SWV: While a lot of our music has traditional blues progressions and we cover a lot of familiar blues standards. We tend to believe that our style pushes the envelope of modern blues and funk. Our grooves are based around a very technical drummer and non-traditional bass lines. Brandon’s style of writing stretches the definition of blues and Nick’s vocals more closely match with soul and gospel music.

BN: Did you have any formal training or self-taught?

SWV: Jarred, Derek and Mike have the most traditional training out of the group. Brandon is mostly self taught, although he has taken lessons in the past, most notably a short stint with local pro Garry Meziere. Nick has no formal training, having learned to sing harmony and lead through family gatherings.

BN: What CD’s do you have out?

SWV: Still Water Vibes is currently working on recording our debut CD, it is yet to be titled. There are rough tracks of three of the songs that will be featured on our web site right now.

BN: What other band have you played with?

SWV: All of us have played in multiple local bands, mostly in non-blues genres. Jarred and Brandon play in an original modern rock band, Groove Thief, that was voted Salem’s best local band a few years ago. All of the group, except for Nick, currently play in other projects and work as subs for multiple groups when not performing with Still Water Vibes.

BN: Are there any former band members you want to mention?

SWV: Still Water Vibes got a lot of its styling from the original drummer, and Nick’s younger brother, Brian Wixom. When Brian was unable to continue playing, it was extremely difficult to find a replacement. Brian began recording the album earlier this year and the album has been on hold since his departure. His style of play can still be heard in the way we play several of our songs today.

BN: Any other comments?

SWV: Being from Salem we are trying very hard to get work in the Portland area and would like to thank the Cascade Blues Association, Rae Gordon and Ben Rice for all of their help while we participated in the Journey To Memphis Competition. We have a new level of confidence and really appreciate all of the publicity that the event provided for us. We look forward to being more visible in the area and have a few events scheduled in the Portland Metro area in the next several months.

For more information about the band and where you can see them, visit their website at www.stillwatervibes.com.