You are here: Home1 / PDX Blues Event2 / Sugaray Rayford Band, Big Man With A Big Voice, Back At The Birk: Sept....

When Sugaray Rayford belts out a song, you not only hear it, you feel it. His command of a stage brings palpable excitement to the audience; he is a superb vocalist and entertainer, a fact that has been proven with two consecutive Blues Music Award nominations for the BB King Entertainer of the year. Just like the man, his dynamic voice is large. His old-school vocal style, echoes Muddy Waters, Otis Redding, and Teddy Pendergrass, and at six-foot-five, Rayford is a big man who moves with grace and energy. His fluid dance steps will remind you of the Legendary James Brown. 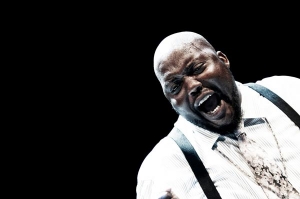 Over the years Sugaray has fronted bands such as Urban Gypsies, International Blues Challenge second place winners Aunt Kizzy’s Boyz, and The Mannish Boys. He’s also fronted his own Sugaray Rayford Band since 2010. This band is currently made up of world-class musicians. Ralph Carter on bass who is also his writing partner, Gino Matteo on guitar, Leo Dombecki on keyboards, Lavelle Jones on drums, Allan Walker on sax, and Gary Bivona on trumpet.

Portland Blues Cruise To Help Journey To Memphis Winners Get To The IBC: Oct....