You are here: Home1 / PDX Blues Event2 / A Sugaray Rayford Weekend at The Birk: April 9th 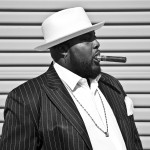 When Sugaray Rayford belts out a song, you not only hear it, you feel it. The Texan-born musician began his musical career at the age of seven, singing and playing drums in church, and his gospel influence can be heard and felt in his music. His career has been on a steady uphill path as his accomplishments mount, from taking second place in the International Blues Challenge with Aunt Kizzy’s Boyz in 2006, to fronting The Mannish Boys, to highly acclaimed accomplishments as a solo performer. Those accomplishments include six Blues Music Award nominations, four this year alone, including the coveted BB King Entertainer of the Year. An engaging performer on stage, with his strong, emotional vocals and dance moves that remind people of  James Brown, Sugaray is always a big-time draw.

Sugaray Rayford will be appearing at the Walla Walla Guitar Festival on Friday, April 8

Then he will be performing two days at The Birk. First for an evening show on Saturday, April 9 at 7:00 pm with his band. Then on Sunday, April 10 the Sugaray Rayford Band will be joined by Seattle-based vocalist Lady A for some church time gospel music starting at 1:00 pm. Tickets for each show are $25.00 in advance through Tickettomato.com and $30.00 at the door. Or purchase the two-day deal for just $40.00. The Birk is located at 11139 Hwy 202 in Birkenfeld. Don’t miss out, as these are Sugaray Rayford’s only Oregon appearances for this tour. Remember, The Birk really isn’t that far.