Knowing that my announcements from the stage at Club 152 were being broadcast through speakers out on to Beale Street I told the people, “It may be cold outside, but the blues are burnin’ hot inside here.” And that in itself could have been the theme for this year’s International Blues Challenge. You just never know what to expect from the weather in the Mid-South and I have seen years when it has been a balmy 60 degrees and others that have witnessed ice and snow. Though we escaped the latter, which was raising havoc across a good deal of the country, contestants and blues fans braved airport closures and hazardous road conditions to make it to Memphis.

And hot blues music was truly at hand. When I first started volunteering to work the IBC for The Blues foundation twelve years earlier, there were only 70 bands, mostly from the United States, Canada and a couple from Australia competing in about a dozen clubs. This year saw a record 255 bands, solo/duos and youth acts from sixteen countries in 20 clubs and there is no sign it is going to slow down in the future. The Pacific Northwest was extremely well represented this year, with five blues societies from Oregon and Washington sending ten acts, and six of those advanced to the semi-finals and two going all the way to The Orpheum Theater for the finals. All three Portland-based acts advanced to the semis, Ben Rice & the iLLamatics and Tevis Hodge Jr from the Cascade Blues Association and the Rae Gordon Band representing Eugene’s Rainy Day Blues Society, with 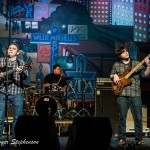 Ben Rice making it to The Orpheum stage on Saturday.

It has been said by many that the blues should not be a competition. But let’s be real, everything in life has its own competitions and music is no exception. Whenever you try to book a gig or attempt to be signed by a label or push yourself through promotions, you’re in competition with everybody else trying to do the same thing. The real goal in Memphis is not winning the IBC. It is about the contacts you make and what can become of them. The IBC brings you to Memphis for this purpose. Nowhere else will you be performing for so many people in the industry that can push your career further. Record labels, festivals, promoters, agents, media outlets, radio personnel, blues societies and fans are all there to see what new talent can be found or acts they have never heard of that will catch their attention. It can surely be a win-win situation for all involved if approached the correct way. Thousands of acts compete world-wide to have this opportunity and as stated by producer Joe Whitmer, “they’re all winners before they even arrive in Memphis having won their own regional competitions.”

Out of the 255 who arrived Wednesday to begin the event, only seventeen make the finals, nine bands and eight solo/duos. Along with Ben Rice & The iLLamatics from the Cascade Blues Association, Arthur Migliazza, the solo act from the South Sound Blues Association in Tacoma also made it to the finals. But it was the Mississippi Delta blues musicians who won out this year in the bands with Vicksburg Blues Society’s Mr. Sipp taking first place and Memphis Blues Society’s Ghost Town Blues Band taking second (and it should be noted that both of these acts were finalists in the event last year). Billy The Kid & The Regulators from the Blues Society of Western Pennsylvania captured third place. In the solo/duo category Calgary Blues Society’s Tim Williams took the overall prize and Lucious Spiller from the Ozark Blues Society of Northwest Arkansas Inc. was second. Other prizes included Castro “Mr. Sipp” Coleman was announced the most promising guitarist in the band category and Tim Williams the guitarist in solo/duos. The Lee Oskar harmonica prize was awarded to Jerome Godboo from the Toronto Blues Society and the Best Self Produced CD prize was given to Hank Mowery and the West Michigan Blues Society for his release Account To Me.

Aside from the actual competition, there were plenty of other events taking place during the IBC, including the annual Keeping the Blues Alive ceremonies for non-performer achievements, seminars to help performers and societies, a free health screening for musicians, the International Showcase and Youth Showcases, special events held by various promoters, societies and groups featuring artists from around the world, and plenty of jams going late into the night that saw well established blues heroes like Bob Margolin, Sean Carney, Candye Kane, Dennis Jones, Janiva Magness, Jonn Del Toro Richardson, Brandon Santini, Rich DelGrosso, Tom Holland, Bob Corritore and many others taking part. All in all a sensational event, despite the cold weather.

This event is far larger than any blues festival. Where else will you find over 200 acts on 20 stages all taking place in one night? And the event goes on for five days. Keep in mind that The Blues Foundation has a paid staff of three full time and one part time employees and you can imagine the kind of work and detail going on behind the scenes. It takes a small army of volunteers, many traveling from all parts of the world, to make this event work. And the cooperation of the Beale Street Merchants and the event’s sponsors to provide the location and expenses to cover it all. It is truly an impossible work made possible that continues to grow annually and should be on every blues fan’s bucket list for must-do events.