You are here: Home1 / jim miller 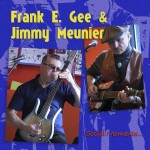 The selections on this recording were made in the winter of 2010 by guitarist Franck Goldwasser and bassist Jim Miller. The two friends had been doing a regular Sunday afternoon gig at Acme Donuts in Portland and had the notion that they could use the tracks to help promote more bookings for themselves, so they hired Jim’s friend Terry Amato to help lay down tunes for them at his home studio. These fourteen tracks are for the most part being heard by the mass public for the first time, with the exception of “The Highway Is Like A Woman,” which appeared on the Cascade Blues Association compilation Puddletown Blues, Vol. 2.

As stated in the liner notes, Franck and Jim had always thought that these songs had the possibility of being more than just a demo to seek out gigs.. But they sat dormant for the time being until the unexpected sudden passing of Jim Miller in late December. Wanting to honor his friend, Franck Goldwasser decided to release the music and used the stage name they had come up for themselves, Frank E. Gee and Jimmy Meunier (Meunier being French for Miller). He went back to Terry Amato and had the numbers cleaned up to sound as perfect as they could. Goldwasser’s guitar is phenomenal as always and Miller’s bass work is as solid as ever, never overstated with just the right feel every time out. It is a true tribute of his playing.

Most of the tracks are cover tunes of artists ranging from Otis Rush, Bill Doggett, JJ Malone, Percy Mayfield, Jimmy Rogers and more. Plus there are a couple of original numbers, including the instrumental titled “Social Moments,” which is also the name of the album, that Goldwasser states was an inside joke between the two friends. Even if it was named in jest, the music follows suit with the overall collection: first class and highly listenable.

Besides paying tribute to the memory of Jim Miller, Goldwasser set the recordings up on franckgoldwasser.bandcamp.com as a download with all proceeds raised from its sale to help Jim’s life partner Wendy make ends meet due to his sudden loss.