You are here: Home1 / Jonathan Barber

END_OF_DOCUMENT_TOKEN_TO_BE_REPLACED 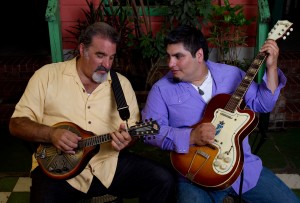 The blues’ premier mandolin man Rich DelGrosso was in Portland just this last May where he had a very nice receptive audience at Duff’s Garage. He’ll be returning once again to the venue on Saturday, July 27th and this time he will be bringing his guitar slinging partner Jonn Del Toro Richardson with him. Richardson has worked with artists such as Diunna Greenleaf & Blue Mercy, Gary Moore, Pinetop Perkins and Otis Taylor and is recognized as one of the finest guitarists hailing from Texas today. Together, DelGrosso and Richardson released the outstanding album Times Slips On By, which garnered the pair a Blues Music Award nomination in 2012. Their music has been described as: “original music from the fertile blues territory of Southeast Texas…. rocking, solid mandolin with fiery guitar in a new spicy mix of Texas blues and roots.” Joining the pair for this show will be a first class rhythm section with Portland’s own Dean Mueller on bass and Jonathan Barber on drums.

Duff’s Garage is located at 1635 SE 7th. Showtime is 9:00 pm. Admission is $15.00. This is a Cascade Blues Association co-sponsored event, so don’t forget to show your membership card at the door to receive a $1.00 discount on admission. Then prepare yourself for some of the finest Texas-based blues you’ll find anywhere from two of Houston’s best musicians.