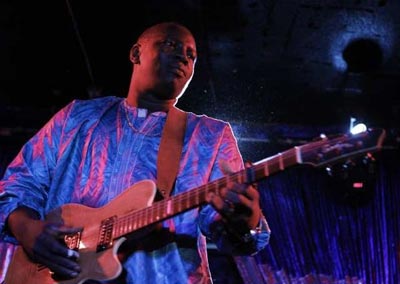 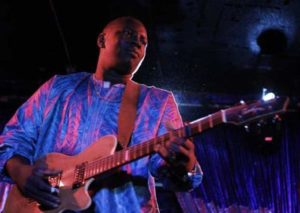 Often referred to as “The Hendrix of the Sahara”, Vieux Farka Toure was born in Niafunké, Mali in 1981. He is the son of the late legendary Malian guitar player Ali Farka Toure, who died in 2006. His father recorded one of the greatest collaboration albums of all time with Ry Cooder, titled Talking Timbuktu, which won a Grammy and illustrated just how close the sounds of Western Africa and the blues actually were. Vieux Farka Toure continues to expand and broaden the sounds of his music, proving himself a more than exceptional guitarist and composer, paying homage to the musicians of the past while looking toward the future and showing that the blues is a blend of generations, from the father to the son.

Mali is a country under a great deal of strife these days. Religious insurgents in the North are attempting to take over the country and would ban music if successful. Listening to the sounds of Malian music show a direct link between their country and original blues. Come witness and listen for yourself before these artists may no longer be allowed to travel and perform this important music.

Vieux Farka Toure is touring to support his fourth solo recording, The Tel Aviv Session and will be performing at Mississippi Studios on Friday, June 28th for a 9:00 pm show. Admission is $22.00 advance and $25.00 day of show. Advance tickets are available through www.ticketbiscuit.com, mostly standing with a seated balcony.