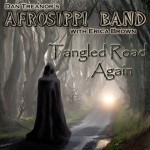 I first saw Erica Brown a few years back when she competed in the venue I run at the International Blues Challenge. An exciting performer who had talent in bunches. I also saw Dan Treanor’s Afrosippi Band perform in Memphis during the event a couple years later and was flat out floored by their presentation. So imagine my thoughts when this past year I discovered both Dan and Erica teamed up. This has got to be a killer pairing for sure. And it was. The band took third place overall in the band competition, putting on one of my most favorite sets in the finals in recent memory.

Now Dan Treanor’s Afrosippi Band featuring Erica Brown have released an album together titled Tangled Road Again and it is sensational. Dan is a blues historian, who has been awarded a Keeping the Blues Alive recognition from The Blues Foundation for his work with Blues in the Schools. The disc opens up with Dan explaining that the original blues came from field hollers and work songs and the band incorporates the use of African instruments such as the Khalam and gitjo. Erica takes center stage on the number in a call and response with the band chanting out “Who’s that walkin’ down a tangled road . . . ain’t nobody but me Lord, ain’t nobody but me.” It is a strong emotional number that sets the pace for this extraordinary album.

Erica’s soulful vocals shine throughout this disc, especially on tracks like “Nothing Can Take The Place Of You” and “Give Me Some Roses.” Merrian Johnson holds the lead vocals on four numbers and back-up voice on the album. She is also a terrific singer and holds more than her own on “You’re Going To Miss Me” and the closing cover of “Wang Dang Doodle.’

Tangled Road Again is very fresh music that explores the blues world in many fashions. Treanor plays mean guitar and blows strong harmonica, as evidenced on a tune like “Tell Me Daddy,” and haunting slide on “I Want Love.” Lionel Young offers his blues violin on the Louisiana-styled piece “Hey Mister” and The Subdudes’ John Magnie on accordion on the same song as well as on “I Want Love.” Erica Brown is a force to reckon with and it is most properly displayed as she belts out Koko Taylor’s “Ernestine” as she tells you women to stay away from her man or you’re going to suffer the consequences. And the way she delivers the message you’re sure to believe her.

Dan Treanor and Erica Brown are a great pairing. This album is already a favorite of mine for the year. Can’t wait to see what comes next. They’re having a ton of fun. You can see it when they’re on stage and it comes across on this fine recording, too.