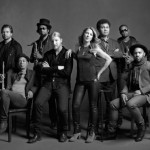 Both husband and wife Derek Trucks and Susan Tedeschi had long standing successful careers as individual artists when they decided to join their talents together in 2010. After all, it is a bit tough on a marriage when you’re separated so much with touring, so why not do it together. It was a match definitely made in heaven as the Tedeschi Trucks Band in its short time as a unit has amassed multiple Grammy and Blues Music Awards, including both band and guitarist of the year, while selling out theaters and headlining festivals around the world.

The Tedeschi Trucks Band, currently touring on their latest highly praised CD, Made Up Mind, will be returning to the Pacific Northwest, with a stop at the Elsinore Theater in Salem on Sunday, December 8th. Tickets are available through www.TicketsWest.com and range from $39.50 to $69.50, with a $2.00 increase in price on the day of the show. This is an all ages event and showtime is at 7:00 pm. The Elsinore Theater is located at 170 High Street SE in Salem. The rock band The London Souls opens.

The Story Of Piano Blues: From The Country To The City Voo Davis
Scroll to top