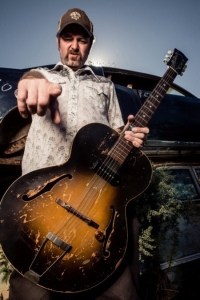 With the heart of a genuine Texas bluesman, the head (banging) of a Zappa and Lemmy disciple, and the boots of a man resting in the dust outside of town at sunrise, Scott H. Biram journeys through the harrowing human condition like no one else. A walk on the Biram side straddles the chasm between sin and redemption and The Bad Testament lands somewhere west of the Old Testament and south of an AA handbook. It’s a record of hard-grinding lost love, blues and deep, dark Americana.

Self proclaimed as the ‘Dirty Old One Man Band,’ Scott H Biram is THE one-man band.  The master of the realm. Why? Because even though he’s one man, he ain’t one thing.  Austin-based Biram ain’t no candy-ass singer/songwriter either, sweetly strumming songs about girls with big eyes and dusty highways. His singing, yodeling, growling, leering, and brash preachin’ and hollerin’ is accompanied by sloppy riffs and licks from his ’59 Gibson guitar and pounding backbeat brought forth by his amplified left foot. The remainder of this one-man band consists of an unwieldy combination of beat-up amplifiers and old microphones strung together by a tangled mess of guitar cables.

Dayna Papaleo of the Rochester City News describe Biram as “[a]n impassioned multi-instrumentalist unleashing a brutal cacophany with the fury of someone whose check from the Devil finally cleared. Half dirty blues, half underground punk, half honky-tonk, half revival meeting…oh shut up about the math. You’ll see the light.”

Scott H. Biram will be appearing at Dante’s, 350 W Burnside, on Saturday, April 1, for a 9:00 pm show. Also on the bill will be Jesse Dayton with his guitar shredding, country-infused Americana sound and Texas duo Alien Knife Fight. Tickets for this night of eclectic sounds are available in advance through Ticketweb.com for $14.00. 21 and over only.