You are here: Home1 / Cascade Blues Note2 / The Beacon Street Titans Will Make Your Feet Want to do a Happy Dance

If you’re up on the dance floor swinging to a jump blues sound, chances are you’re listening to The Beacon Street Titans. These seven musicians have over 214 years of combined experience and this lively band was nominated for the Cascade Blues Association 2013 Muddy Award for Best New Act. 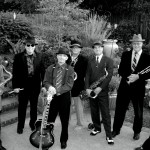 But how did they become The Beacon Street Titans? “After a couple of years of playing under less-than-inspired band names that sounded good at the time but we ended up hating after seeing it in print, Dan, our first saxophone player showed up one day and asked ‘What about The Beacon Street Titans?’ We, that is, myself, Howard, and whatever drummer we had at the time (we’ve auditioned 23 drummers over the years) thought ‘Yeah, we like it.’ It sounded like a big band. By that time we all had aspirations of growing the band so we felt The Beacon Street Titans seemed to live up to our aspirations, even if the number of personnel hadn’t quite filled out yet. The more guys we took on and the closer we got to a swing-centric set list, the more it resonated with our fans. It was definitely a step in the right direction branding-wise,” according to Daryl Boggs.

The band has been around for about 10 years, with Howard McClung (on vocals, harmonica and sax,) and Daryl Boggs (on guitar,) working together since the band started. Its founding rhythm section consisted of Craig Birnie (on bass) and Rick Berman (on drums). “Both are great human beings and talented musicians,” Daryl said.

“Lots of guys have been in and out on the rhythm section but Dan Covrett (on sax) has been with us about six years and Steve Maliszewski (on upright bass) joined up not long after Dan. Tom Ladouceur (on sax) joined perhaps two or three years ago. Jim Swecker (on trumpet) and Bill McNamara (on drums) are the most recent editions in the past year or two.”

Daryl describes their music as “Portland’s answer to Roomful of Blues. We do a lot of blues, west coast jump, swing, jazz and R&B.”

Their musical influences come through their sound. “We are a product of two worlds coming together to perform music in a really special way. We started as a straight-ahead west coast blues band that slowly took on the sonic identify of something closer to neo-swing as we added more players who were rooted in jazz. Little Walter, Magic Dick, Jimmy “Baby Face” Lewis, Slim Gaillard, Buddy Rich, Joe Jones, Stan Getz, Chet Baker, Stanley Turrentine, Houston Person, Sonny Stitt, Hollywood Fats and Benny Goodman are some of the band’s combined influences.”

The bandmembers have varying experience and musical education.

Daryl was self-taught and holds Certification from Musicians Institute/Hollywood California. “I played in Los Angeles for 18 years with some of the best unknown players in so Cal with various groups. The Daryl Boggs Quartet, my last outfit in Los Angeles, marked the pinnacle of my success out there. Over the years I’ve shared the bill with Mike Morgan and the Crawl, Big Sandy, Robben Ford, Kid Ramos, Doug McCloud, Lynwood Slim, Denny Freeman, Joe Sublett, Bugs Henderson, Smokey Wilson, Arthur Adams, Burning Water w/Michael Landau and Juke Logan, John Marx and The Blues Patrol, Lenny Kurley and The Blues Priority, Kenny Blue Ray.. . . and many more that slip my mind at the moment. Local players that come to mind are Franco Paletta, Linda Myers, Kirk Bryant, Donny Osborne and Ben Rice. Of course, the current players I’ve surrounded myself with in The Beacon Street Titans are some of the best I’ve ever had the honor to work with and I’m really very fortunate to call them my friends.”

Howard was also self-taught. “I’ve played with The 55th Street Blues Band, Dallas Tally Band, and Michael Fierro, but the best musicians I’ve ever played with are the ones in this band.”

Steve is self-taught with a music degree and played with the Willamette Falls Symphony Orchestra.

Bill also has a music degree. He has played with Tommy Newsome, Tonight Show Band, Ed Shaunessy, was founding drummer for Chesterfield King, and was with the Sultans of Swing for ten years in Bakersfield, CA. He played with Vicki Carr and for the Joan Rivers Show. He also played in college, Cal State Bakersfield, Jazz ensembles. Bill was with a professional jazz ensemble called Electric Oil Sump for ten years, well known in Bakersfield, CA. And he was the drummer in his own big band for over a year, Vintage Note, with sixteen pieces.

Dan’s music degree helped him as music director for the Del Vikings. He played with Steve Lucky (of the Rhumba Bums) when they were in the Blue Front Persuaders. He’s also played with countless local people.

They are currently looking at studios for their debut CD. To listen to their music and find out about upcoming show, visit them at www.reverbnation.com/beaconstreet.