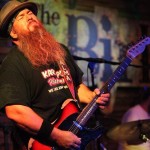 California guitarist and vocalist Harlis Sweetwater originally made a name for himself with the bands Barrelhouse O.C. and the Bastard Winos, but his deep affection for the blues, soul, and Americana music — these are the styles of music that he feels most comfortable performing — led him to put together his own outfit, The Harlis Sweetwater Band, in 2012. Known for his intense guitar work and gravely vocals — the Orange County Register claims that he’s “the best singer in any genre” — the party Sweetwater and his band have on the stage rival the party the audience has on the floor, making their performance highly entertaining and mesmerizing. With two highly praised albums under its belt, The Harlis Sweetwater Band is starting to spread its name across the country.

After a well-received show at The Birk last September, the band returns to the venue for two performances, Saturday, March 12 at 7:00 pm and Sunday, March 13 for an afternoon show at 1:00 pm. The Birk is located in Birkenfeld at 11139 Hwy 202. Head on out for your only chance to catch the Harlis Sweetwater Band on this tour in Northern Oregon. It’s not that far.