What’s better than a nice drive into the country on an early September evening? Why, heading out to The Birk to catch a stupendous live performance by the one and only Sugaray Rayford, of course. And what can be better than that? Two straight nights of Sugaray at his only stop in Oregon on this tour. 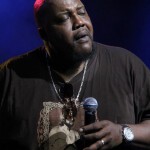 Texas born Sugaray began his musical career before the age of seven singing and playing drums in church, and this gospel influence can be heard and felt in his music. Rayford’s phrasing is intimate and conversational, with a powerful, sexy, and soulful voice. He has become a regular nominee in the BluesMusic Awards the past few years for his role with The Mannish Boys, and more recently under his own name. This past May he was nominated for two of the highest honors awarded, Traditional Male Artist of the Year and the BB King Entertainer of the Year. He is currently touring to promote his latest release, Southside.

The Sugaray Rayford Blues Band returns to The Birk, 11139 Hwy 202, Birkenfeld, for two exclusive nights on Thursday, September 10 and Friday, September 11. Both nights begin at 7:00 pm. General admission is $25.00 advance through TicketTomato.com, or $30.00 at the door.