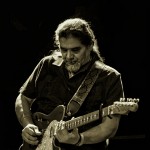 “Daniel Castro is the latest and one of the greatest blues guitarists to come bursting out of the highly competitive West Coast scene. To the classic music of B.B. King, Albert King, and Albert Collins he has added the three T’s taste, tone, and technique. His raw passion warms your soul while his deep groove kicks your butt on fine, fresh originals and well chosen covers.” – Dave Rubin — Guitar Player Magazine

Describing Daniel Castro as a blues artist doesn’t begin to tell the whole story. A highly accomplished guitarist and singer/songwriter with a strong musical point of view grounded in the very best blues traditions is more like it. Combine those talents with original blues-based material and you begin to understand Daniel’s strengths as an artist. Well-known for being a dynamic performer who “leaves it all on the stage” night after night, Daniel brings crowds to their feet with his blistering solos, soulful singing, and tight arrangements. Daniel has always played with seasoned musicians, but with his newest incarnation, the Daniel Castro Band raises the bar and is truly a force to be reckoned with.

The Daniel Castro Band will be making a return trip to The Birk where its last performance had been well-received and enthusiastic. The visit will take place on Sunday, March 20 with a special afternoon show starting at 1:00 pm. The Birk is located at 11139 Hwy 202 in Birkenfeld.

Portland’s Newest Grand Venue to Host “A Life For Lynn” Benefit Concert:... I Put a Spell on You – A Tribute to Nina Simone by The Adrian Martin Sextet...
Scroll to top