You are here: Home1 / CD Review2 / The Blues Cabaret 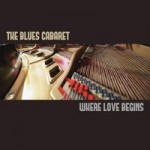 The Blues Cabaret, the creation of Portland-based composer and pianist Dave Fleschner, is a broadway styled stage production that focuses on a main character who has found a new direction later in life than one would usually and focuses on the tribulations he encounters. Now a theater-like atmosphere may not seem like an angle that you would normally find the blues being set, but that’s exactly what happens here. Where Love Begins is a selection of songs that make up The Blues Cabaret production and it is filled with heartbreak, humor, and harmonizing vocals.

To bring the story to life, Fleschner has employed San Diego blues vocalist Earl Thomas, along with Billy Mixer and Jimmy Wilcox of The Portland Gay Men’s Chorus. The blend of their voices together or individually move the story along nicely. The music behind them is well-crafted with a number of recognizable names such as guitarists Alan Hager, Dan Gildea and Vyasa Dodson, bassist Bill Athens, drummers Carlton Jackson and Russ Kleiner, percussionist Chuk Barber, and a small army of horn and string players. Over it all, Dave Fleschner’s piano brightly shines, providing the emotion structure behind the songs’ stories.

There are plenty of captivating highlights. There’s the down-home comfort of “Chicken Pot Pie” where the singer tells us that Portland may have its gourmet food carts and Memphis its barbecue that cannot be beat, but nothing compares to the country cooking of his youth. The humorous situation in “Goin’ To A Party” unbeknownst that it is a swingers party and as his partner goes home with his friend, he ends up with the friend’s wife who is about 300 pounds, maybe 400. Going to stick around and have a few more drinks before he’s ready to leave. Or how can it be possible in “Was This Love Written In The Stars” that this love is real if it feels like it was written on a bathroom wall? Lots of vocal power going on throughout the disc, but perhaps the strongest may be Thomas’ lead on “I Want To Love You,” a touching number where the character wants to be in love with the person he’s attracted to, but his life will not permit it at this time.

It is a definite different approach with the theatrical setting, but The Blues Cabaret with its vocal harmonies still holds onto blues themes throughout the lyrics and the performances both vocally and musically are on right on target. A very commendable, enjoyable and well-crafted production from the pen of Dave Fleschner.