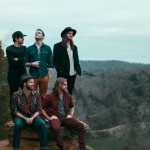 The Delta Saints are a Nashville-based band who have stripped their roots/blues sound down to its essence and rearranged the elements into something uniquely their own. Steeped in rock ‘n’ roll’s building blocks – country, R&B, soul and gospel – The Delta Saints explore influences like Jack White, The Black Keys, My Morning Jacket, Band of Horses and Led Zeppelin. When asked to describe their most recent release, Bones, band leader Ben Ringel stated, “We’re trying to push ourselves forward to do something more modern, but at the same time incorporating where we come from.” A testament to their mixed appeal, they have opened for such diverse acts as Blackberry Smoke, Robert Randolph & The Family Band, Taj Mahal, Dickey Betts and Michael Franti & Spearhead.

Currently on a cross country tour, The Delta Saints will hit Portland on Saturday, August 8, for a 9:00 pm show at Dante’s, 350 W Burnside. This is a 21 and over only show with tickets available in advance through TicketBiscuit.com for $10.00.