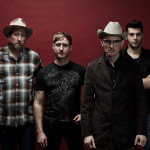 The Legendary Shack Shakers’ hell-for-leather roadshow has earned quite a name for itself with its unique brand of Southern Gothic that is all-at-once irreverent, revisionist, dangerous, and fun. Led by their charismatic, rail-thin frontman and blues-harpist JD Wilkes, the Shack Shakers are a four-man wrecking crew from the South whose explosive interpretations of the blues, punk, rock, and country have made fans, critics, and legions of potential converts into true believers. Although not yet legendary, the band has grown into its reputation the last several years due to their heavy tour schedule, six critically acclaimed studio albums, and songs that have been featured on television shows such as HBO’s True Blood. Past tour mates and fans include Robert Plant, Rancid, The Black Keys, Slim Cessna’s Auto Club, and Hank Williams III.

Armed with a new album, titled The Southern Surreal, The Legendary Shack Shakers will steam into Portland for a performance at The Wonder Ballroom, 128 NE Russell, on Saturday, March 12 starting at 8:00 pm as part of a bill that also includes Reverend Horton Heat, Unknown Hinson, and Lincoln Durham. Tickets for this 21 & over event are $23.00 advance and $25.00 day of show and can be purchased at TicketFly.com.