You are here: Home1 / Past PDX Blues Event 20132 / The Mighty Mojo Prophets Coming To Duff’s Garage 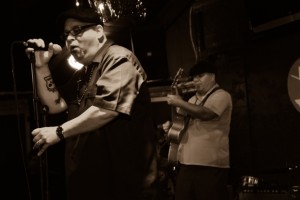 From Long Beach, California, Rip Cat Recording artists The Mighty Mojo Prophets will be heading to Portland for a show at Duff’s Garage (1635 SE 7th) on Sunday, July 7th at 8:00 pm. Nominated for a Blues Music Award in 2012 for the debut recording, they are currently touring to support their follow-up disc titled Flyin’ Home From Memphis. The band is fronted by vocalist Tom “Big Son” Eliff and guitarist Mitch “Da Switch” Dow, who are continuing the long tradition of first-rate blues originating from Southern California. It is honest, straight-up West Coast blues with a little blues flavoring from Chicago and Texas, with Memphis soul, country blues and proto-rock ‘n’ roll thrown into the mix.

Admission for The Mighty Mojo Prophets is $10.00, but this is a Cascade Blues Association co-sponsored event, so show your current membership card at the door to receive a $1.00 discount. The perfect way to keep the blues rolling after the Waterfront Blues Festival has come to an end.