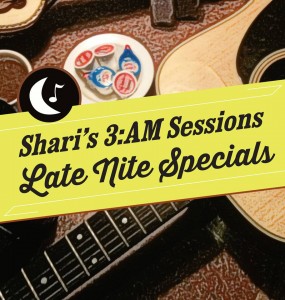 Now an all-night restaurant is not really the place you’re going to expect to run into live music.. Especially if it’s well after midnight, more on this side of the crack of dawn. But there amongst the insomniacs, the truck drivers and those that are just up all night type of folks, at various Portland area Shari’s Restaurants, a group of musicians will occasionally pop in, instruments in hand and have a little jam session along with their coffee and pie. Maybe they’re just a bit restless as these usually take place after gigs, or maybe it’s because they’re musicians and working until late at night that they need to go someplace on their nights off, too.

It all started with buddies Chad Rupp and Ryan McKenzie heading down the street from their home late nights with Chad bringing in his guitar, ukulele or harmonica. Ryan had the idea to shoot video on his camera phone, which found their way to YouTube and Facebook. People seemed to be enjoying this short films and other musicians were invited to drop on by until they got to be a tight little grouping of players and Ryan’s phone became more elaborate equipment. And they collected enough prime recordings that the idea to put out a CD came to mind.

Tatsuoka soars on her original “Sure,” displaying quite a vocal range, which is also highlighted on The Beatles’ “Norwegian Wood” accompanied by tasteful piano from Heston. Rupp gives quite a down in the Bayou type of feel to his take on The Beatles’ “Come Together,” enhanced by resonator guitar by Rice. Makosky proves that he can pen clever lyrics with his originals “Rice and Chicken” that tells the woes of musicians and those reminiscing how things once were, “Going Out To Portland” and “Keep Portland Weird’ that he co-wrote with Mark Didier. That last track also sizzles with Makosky on cigarbox while Richard Staats keeps pace on guitar. Throughout the disc Uhlig is rock solid on his bass lines and Rice’s guitar work is extraordinary. The disc opens and closes with Rice. His original “You’re Gonna Go Away” is quite remindful of the type of music that Sean Costello put out on his last recording and the final track finds Rice doing justice to Sam Cooke. He also plays driving resonator on Robert Johnson’s “If I Had Possesion Of Judgement Day” with Makosky on second guitar, Uhlig on bass and Rupp playing rolling harmonica.

You may have thoughts to what the sound of this album is going to be like having been recorded in a restaurant setting. But you need not worry, McKenzie and the crack sharp duo of Makosky & Staats worked magic in the mixing and you cannot even tell it was done in a public place. There may be an occasional imperfection here or there, but remember this is a live recording and that is bound to happen. But Shari’s 3am Sessions: Late Nite Specials is a very well-produced recording. Once again considering the live setting and the time of night these guys have done a masterful job with bringing it all together. And I’m sure the customers dining in the wee hours probably didn’t mind the entertainment either.