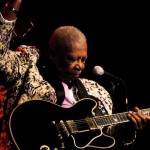 The Cascade Blues Association is saddened to hear of the passing of the legendary BBKing on Thursday, May 14 at the age of 89. BB King is arguably the most important blues musician to ever grace a stage or recording. He was a world-wide ambassador of not only the blues, but American music as a whole, and he toured endlessly, averaging well over 300 shows a year for most of his six decades-plus career. BB was a humble and gracious man who took the time to meet with as many of his fans as he could — including presidents, kings, and religious leaders. He was honored with 15 Grammy Awards, nominated 39 times for Blues Music Awards winning 15 and eventually having the Entertainer of the Year Award named for him. BB was inducted into the Blues Hall of Fame in 1980, the Rock & Roll Hall of Fame in 1987, and awarded the Presidential Medal of Freedom in 2006. King possessed a unique and instantly recognizable style of playing and singing with his call and response interplay between his voice and the strings of his guitar, “Lucille.” His guitar style unquestionably influenced every guitar player since, no matter what genre he or she plays. An icon of the music world has left us physically, but through his music, BB will live on as one of the greatest artists of his time.

The Cascade Blues Association and the BluesNotes will feature a full tribute to BB King in the July issue. We want to recognize the impact he had on us all in greater depth, something that we’re unable to accomplish with his passing at the monthly deadline for our June edition.