Too Many Roads
Ruf Records 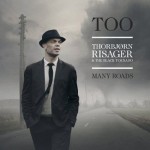 This is the eighth album released by Danish bluesman Thorbjorn Risager and it is truly a testimony to his prolific songwriting abilities and his knack for creating high quality sounding music. He has an authentic feel for a European performing American-based music. It is catchy and the lyrics are intensely deep in their emotions and delivered through a variety of musical angles that can be deep down home bluesy and haunting (“Too Many Roads”) with nice slide acoustic guitar, maybe a bit jazzy perhaps loungy (“Drowning”) and sometimes soulful (“Through the Tears”). But whatever direction, this is an act to be heard. It’s certainly quite a fresh sound and maybe something you didn’t expect from a European blues band. The band, the Black Tornado, consists of seven over the top players that includes a sharp horn section. Risager himself has a rich voice with a range that can read gritty or smooth depending on the song at hand, and his guitar playing is also well done.

“High Rolling” is a rocker that builds in momentum and has a biting guitar solo midway through, telling the story about how love can be sometimes like a gamble, capable of going in either direction. “Rich Man” with its horn punctuations reminds me of classic New Orleans R&B that may have been at home being sung by Ernie K-Doe or Bennie Spellman. That is followed by “Play On” that easily brings to mind the frenetic piano boogie styling of Jerry Lee Lewis. There is even a cover of an old Nat King Cole, “China Gate.” In fact, that is the only cover on the disc. The original material was penned one each by guitar player Peter Skjerning (“Backseat Driver”) and drummer Martin Seidlin (“Rich Man”), with all the others written by Risager himself.

All of the selections are modern, but they still draw from traditional bases such as failing relationships and choices made throughout one’s life, be they good or bad. Too Many Roads is an exceptional album in every sense. Who would’ve thought that one of the most refreshing new blues directions of the year would come from Denmark. Well worth hearing.