You are here: Home1 / CD Review2 / Tommy Castro And The Painkillers

The Devil You Know
Alligator Records 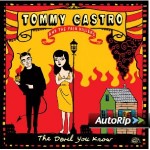 The Devil You Know is a new direction for Tommy Castro. Well, maybe not so new. It’s really a return to his roots. Back to performing with a bare-boned band, pouring out sharp-edged guitar driven blues as he had started out in those smoky clubs in the San Francisco Bay Area, where the beer flowed freely at the bar and local die-hard fans came out to spend their pay checks and to dance the night away with a get-down, greasy blues band like Tommy’s.

About a year ago, Castro made the decision to take on this direction. After more than two decades, touring the world’s most renowned venues, the largest festivals, cruise ships and twelve Blues Music Award nomination garnering six wins including two times as the BB King Entertainer of the Year. It may have seemed like a step-back in time for him as he had worked with saxophonist Keith Crossan since the early 90s. Crossan went on to form his own band and Castro, along with original Tommy Castro Band bassist Randy McDonald, keyboardist James Pace and drummer David Tucker formed The Painkillers.

The Devil You Know is the first album from Tommy Castro and The Painkillers. The feel is pure rocking blues with nine original tunes and four covers. The disc is chock full of special guests and terrific numbers start to finish. “When I Cross The Mississippi” is a barn burning affair featuring Castro accompanied by guitarist Mark Karan and Tab Benoit trading licks and vocals as Mike Finnegan’s clever organ playing spurs them on. It seems strange that Samantha Fish is brought in for the recording and does not play any guitar herself, just providing appealing vocals. But boy howdy does she sing on this number! Joe Bonamassa is also on hand in a string wrangling tandem with Castro on Savoy Brown’s Chris Youlden’s song “I’m Tired.” Marcia Ball also makes an appearance laying down authentic Louisiana inspired piano on “Mojo Hannah.” The band does a splendid version of JB Lenoir’s “The Whale Have Swallowed Me” and perhaps the highlight of the album is a picture perfect take on Wet Willie’s classic “Keep On Smilin’.” Mike Duke’s piano holds the tune to the forefront while Tommy provides some soulful singing within his gravelly voice here and the duo guitar with Mark Karan brings out the Southern rock feeling. Then there is the vocal backing of The Holmes Brothers and Magic Dick blowing harmonica gold on “Two Steps Forward.” “The Devil You Know” is a reference to those you think you know best. They may do you wrong from time to time, but in the long run perhaps you’re better off knowing what to expect from them rather than taking a chance on something new that just might bite your tail harder in the long run.

After sitting on top of the blues world for so long with an established band and sound, has Tommy Castro made a mistake in the back step to this basic outfit? If The Devil You Know is any indication he is probably going to be all right. The energetic drive that has always been behind Castro is alive and well. And The Painkillers should be a force to be reckoned with on stage. Yeah, they’re going to be just fine and they’ll be accepted by their long-time fans as well.