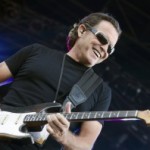 One of the West Coast’s most beloved bluesmen, Tommy Castro, has garnered a great deal of acclaim over his four decade career. With fourteen albums and numerous Blues Music Awards nominations and wins, including the coveted Band of the Year and BB King Entertainer of the Year, he has definitely sealed his name in blues history. His shows are exciting, and feature a crack outfit that has worked with him for a number of years, including bassist Randy McDonald, keyboardist Michael Emerson and drummer Bowen Brown making up The Painkillers. His latest album, Method To My Madness, continues his impressive string of high caliber recordings.

Tommy Castro & The Painkillers will return to Portland for a show at the Alberta Rose Theatre, 3000 NE Alberta Street, on Thursday, February 18 at 8:00 pm.  This show is open to all ages, with minors okay when accompanied by a parent or guardian. Tickets are $20.00 in advance through the venue’s website, AlbertaRoseTheatre.com or $25.00 at the door day of show.