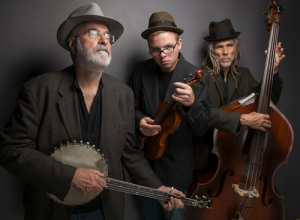 3hattrio is quite a genre-defying band. Made up of three musicians, Hal Cannon on vocals. Guitar and banjo, Eli Wrankle on violin and Greg Istock on stand-up bass, the music they create can be hypnotic and mesmerizing. Described as American Desert Music, it is so much more. It intermingles the sounds of folk, country, gypsy jazz and bluegrass while coming across at times in the forms of Americana and trance blues, the type of music that may bring to mind Otis Taylor or the South Memphis String Band with Alvin Youngblood-Hart and Jimbo Mathus. The band hails from Utah’s Zion Canyon, with three albums to their credit, they state that it is their surroundings in the desert that inspires their sound.

“Rare music, beautifully played and dripping with emotion. This is one of the most impressive albums (Solitaire) I’ve heard this year, so simply played and yet so deep and complex.” – Andy Snipper, Blues Matters Magazine

3hattrio will be performing at The Lake Theater & Café, 106 N State Street, Lake Oswego, on Monday, March 13, starting at 7:00 pm. Tickets are $15.00, and VIP tables are available for $80.00 (seats four, closest to the stage), and can be purchased at the venue’s website laketheatercafe.com.