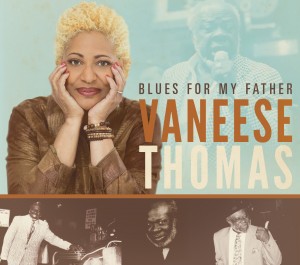 Blues For My Father
Segue Records

Here is another example of the apple not falling too far from the tree. Vaneese Thomas is the daughter of famed Memphis icon and bluesman Rufus Thomas and the sister of Carla and Marvell, both who have also set a permanent marker in the music world with their own contributions. Vaneese is a terrific vocalist and proves herself on this outing as a strong songwriter, penning ten of the twelve selections.

Though she has lived in New York City, her music maintains a knack for the sounds of pure Memphis soul and R&B. If you have listened to a great deal of music over the years you have without doubt heard her voice before, as she has worked onstage and on recordings not only with her father and sister, but such highly regarded artists as Eric Clapton, Michael Jackson, Celine Dion, Stevie Wonder, Sting and even Luciano Pavarotti. She is simply one of the finest voices going and her new release, Blues for My Father, proves that without every spin of the disc.

The band behind her is crack of the whip sharp, laying down perfect grooves that compliment her vocals. This is sultry and sexy music with nary a bad number to be found, sounding better with each and every listen. Songs like “Wrap Your Arms Around Me,” “Corner Of Heartache And Pain” and “When My Baby Gets Home” are definite must hear numbers, filled with true heartache and emotion. Vaneese is joined by her siblings on the track “Wrong Turn” making it a family affair of the best proportions as the sisters duet vocally and Marvell lays down expressive organ. Even her cover of John Fogerty’s “The Old Man Down The Road” delivers a Memphis groove.

But without doubt, perhaps the most interesting number on the album is the duet she has crafted with her late father on his song “Can’t ever Let You Go.” Originally recorded by Rufus in 1962, Vaneese took the same path that Natalie Cole did with her father a few years back, digitally over-laying the number with her own parts that works exceptionally well. It is a tribute that is done with class and should bring this often overlooked number of Rufus’ to the appreciation it deserves.

If you were not familiar with the name Vaneese Thomas before, you’re surely going to know it now. This is definitely legacy showing strong with an artist that should grow into a favorite. Blues For My Father just may convince you as well. Outstanding!